In the 100 years, we’ve been in residence here, we’ve had the privilege of dressing the good, the great and the little known; from rock stars to royalty to the most sartorially discerning ladies and gentlemen. 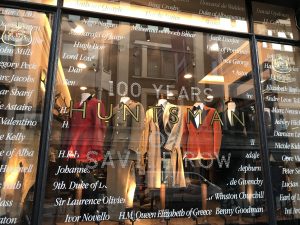 To celebrate 100 years of sartorial excellence, our window display at 11 Savile Row showcases some of our most iconic garments from the last 100 years. With An order book far too comprehensive to fit in the window it its entirety, you’ll find the names of 100 of our most noteworthy clients across the window, you’ll be surprised at how many you might recognise, and even more so at those you don’t! 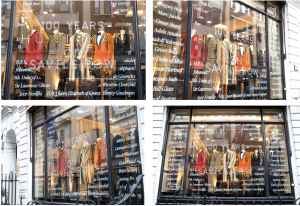 As a bespoke house, we owe our reputation to the skill and talent of our expert cutters and masterfully skilled team of tailors. In homage to their unfaltering work; our logo appears stitched as if sewn onto the glass, their expertise and dedication is stitched not only into every garment, but into the building itself. 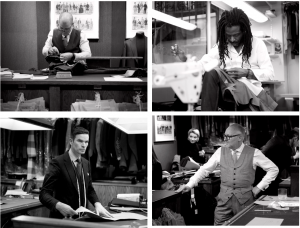 The garments you’ll see displayed all have great historical importance to us at Huntsman, from our origins through to the present day. Starting with none other than an original pair of Henry Huntsman’s own riding breeches.

Our origins begin at  No. 126 New Bond Street when our founder Henry Huntsman purchased a “Gaiter and Breeches Maker”, as a bespoke tailors which incorporated an equestrian wear workshop, the house quickly gained a reputation for dressing the hunting and riding aristocracy of Europe for much of the nineteenth century,  a specialism which became the very foundations of the house. Accordingly, a classic red coat is the next garment displayed. It is from our equestrian roots that the Huntsman coat takes its signature style. 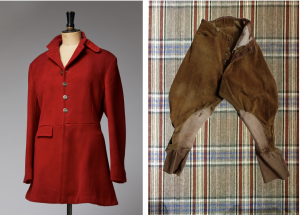 It was in 1919 that  H. Huntsman & Son moved to our current location at 11 Savile Row. Savile Row had been a tailoring destination since the early 19th century, and so it was a perfect fit for Huntsman to take a rightful place among other bespoke houses.

Huntsman was a key military tailor to British army officers during both the First and Second World Wars, and tragically, several ledger books remain in the company archives which list Huntsman dressed officers, as well as their unfortunate fates in the margins. In a fitting tribute to the brave Huntsman clients who served in our forces, and for whom we made uniforms with pride. Next in the window is a regimental uniform from 1943.

After supplying military uniforms to servicemen during WWI, the house had become a favorite among the returning veterans, who were looking to re-join civilian life in suits that reflected the new, post-war world. Come the 1950s, under the masterful guidance of Head Cutter Colin Hammick, Huntsman established itself as the undisputed destination tailor for Hollywood’s leading lights.

Hammick’s glamorous aesthetic and talent as a craftsman ensured that stars from around the world flocked to experience the best cut on the row. Our ledger books record orders from stars such as Clark Gable, Rex Harrison, Lawrence Olivier, Paul Newman, Dirk Bogarde and Katharine Hepburn not to mention the clothes the house made for artists and fashion designers ranging from Hubert de Givenchy and Bill Blass to Lucien Freud.

A star whose name features prolifically in our order books is that of Gregory Peck; one of Hollywood’s greatest and most debonair film stars with a career that spanned over 60 years. His patronage of Huntsman commenced in 1953 and was to last for five decades with Huntsman’s team of cutters and tailors producing over 160 orders for the star. Peck was the perfect ambassador to sport the firms now-iconic house style, amassing a collection of bespoke suits and shirts for both on screen roles and in his personal life. Our window, of course, would not be complete without a classic Peck suit and shirt.

Of course, it’s not only our reputation with Huntsmen which gained notoriety, as a house long established as outfitting extraordinary women, dressing some of the world’s most elegant, powerful and influential female figures for more than 150 years. 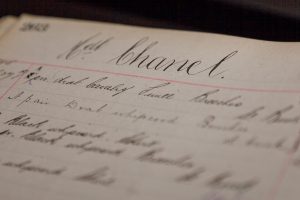 No less than Queen Victoria herself; a leading lady who had an incredible understanding of what a bespoke cut and fit could bring to the functionality and elegance of ladieswear. From fashion, stage and screen, high society and royalty, Huntsman’s client list is a veritable who’s who of the world’s best-dressed women. In celebration of this, we showcase the black velvet evening gown, made from an archive garment cut by Colin Hammick himself, in 1953. 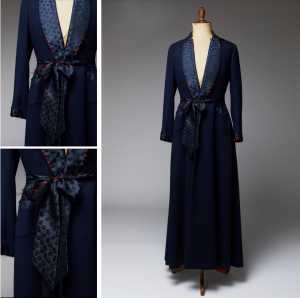 Next is a jacket which will be instantly recognisable the world over. The bespoke orange velvet dinner jacket finished with a black grosgrain facing and buttons, worn by Taron Egerton in the movie. Visitors to the shop are well acquainted with the Orange Velvet Jacket in our Kingsman Fitting Room. Under the direction of Matthew Vaughn himself, the now-iconic jacket was created, and hand-cut by Head Cutter Campbell Carey bespoke for the movie and served as the direct inspiration for the coat seen on screen. 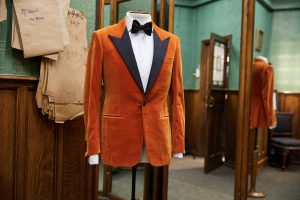 Huntsman has served as the inspiration for Matthew Vaughn’s blockbuster Kingsman movies The Secret Service, The Golden Circle and The King’s Man.  A prequel to the Kingsman movie series, the King’s Man features bespoke Huntsman suits once again and will be released in 2020. It was during an appointment with his cutter, Vaughn imagined moving beyond the walls of the fitting room, with the legendary premises acting as a smokescreen for his team of spies, the Kingsmen. From there, the story of Kingsman at Huntsman gathered momentum and never looked back!

And finally, as we mark our centenary on Savile Row, we stay true to our promise: ‘Contemporary since 1849’.  The iconic house silhouette captured perfectly in a Bespoke 100 suit.

Launched in January of this year, Bespoke 100 offers the same unmatched quality and prestige perfected over 100 years of service, optimised for a more convenient bespoke experience. Bespoke 100 delivers a two-piece suit in only 6 to 8 weeks which is 30% faster than a conventional bespoke service and with a starting price of £3500, it is perfect for the modern, time conscious gentleman. Bespoke 100 joins our celebrated Bespoke 1849 service, which has remained unchanged since our founding.

With each garment, we celebrate a new chapter of our history; the foundations from which we have built a legacy of sartorial excellence, whatever the next 100 years holds we can, however, guarantee the same dedicated service to our cherished clients. Whichever bespoke service your choose today, the prestige of wearing a Huntsman suit is unfaltering.

Tell us your favourite memory of Huntsman from decades past! We’d love to hear the stories you have of your own Huntsman experiences, perhaps you have a garment you think would be fitting for our window retrospective? Chat to us and let us know!