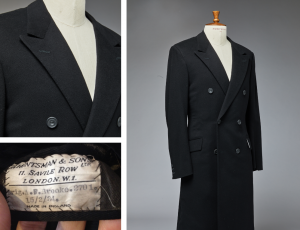 Lord Alanbrooke was Chief of the Imperial General Staff during the Second World War, making him the professional head of the entire British Army. A confidante of Winston Churchill, Brooke was his top military adviser at the time of the D-day landings. From our archive, we present his overcoat from 1934, which was acquired for our collection by our Chairman, Pierre Lagrange.

The garment itself is in superb condition for its age. The fabric is perfect and the coat has no fading whatsoever, in a deep blue, indeed there are no tears or damage in the lining. The only sign of wear is around the inside pocket where the stitching has come away, which is in keeping with its age and is easily repairable.

It is a classic double-breasted which epitomise timeless British styling with its roots in military history but is a style now mainstream in modern fashion and was made famous by figures like Churchill and Brooke. In fact, this style of overcoat is still the only authorised overcoat for Officers in the British Army. 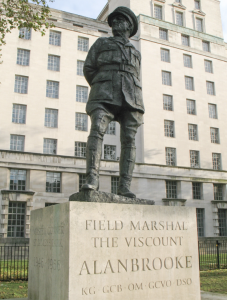