As purveyors of timeless Savile Row tailoring, Huntsman’s world-renowned garments, tweeds and craftsmanship are the perfect accompaniment to the finer things in life. Not least, beautiful vehicles. Huntsman and the world’s most spectacular automobiles go hand in leather driving gloves. Here are five of the most eye-catching examples of how we’ve driven car couture to new heights of luxury and elegance over the years. 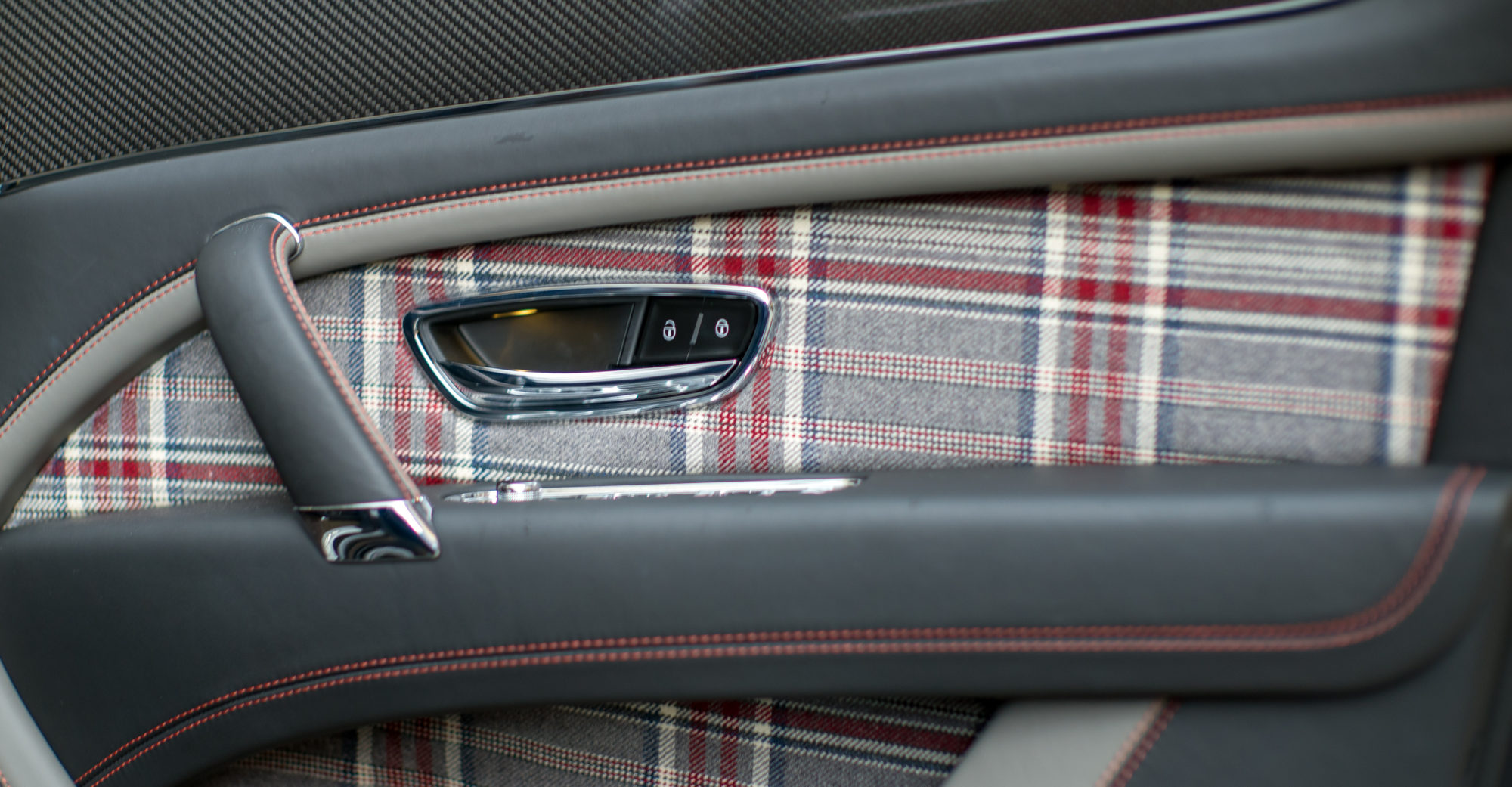 Founded by one of those famous aforementioned ‘Bentley Boys’, Jack Barclay, Bentley’s flagship store is also a nearby neighbour, residing as we do in London’s capital of luxury: Mayfair.  From this match made in car couture, heaven came ‘The Sportsman’ and ‘The Businessman’ models of Bentaygas. Both of which featured a distinctive Peck ‘62 tweed running throughout the interior.

Both versions of Bentley’s marquee SUV were also installed with a bespoke Mulliner wooden chessboard trimmed in Huntsman fabric, found nestled in the rear seat rests. An elegant homage to the chequerboard flooring of the Jack Barclay Bentley showroom.

Inspired by the ‘Bentley Boys’, a group of playboy British motorists who drove Bentley sports cars to victory at the Le Mans 24-hour races of the roaring twenties, and classic Bentley leather upholstery, the quilted leather jacket was a love letter to a bygone era of dashing racing exploits.

Made from Lamb Napa leather with a Coypu fur collar and tie belt fastening, this handsome piece of collector car fashion was designed to give warmth and flexibility whilst in the driving seat.

Lined with a bespoke Bentley sketch, the exquisite Huntsman x Bentley jacket also featured flap breast pockets and zip cuffs for the discerning driver to access their sunglasses and watch.

Airstream is an iconic American brand famed for its sleek, polished aluminum recreational trailers and vehicles. With a rich heritage harking back to the 1920s, their allure was somewhat magnetic for Huntsman. Stymied by planning permission, Huntsman owner and keen sportsman Pierre Lagrange took a rather more creative approach to develop extra guest suites for shooting parties at his Hampshire home.

Airstream is an iconic American brand famed for its sleek, polished aluminum recreational trailers and vehicles. With a rich heritage harking back to the 1920s, their allure was somewhat magnetic for Huntsman. Stymied by planning permission, Huntsman owner and keen sportsman Pierre Lagrange took a rather more creative approach to develop extra guest suites for shooting parties at his Hampshire home.

Two Airstream ‘Land Yacht’ trailers residing in Pierre’s orchard were duly given the Huntsman treatment. One upholstered in heather purple check, the other in earthy tones, and both furnished with wood-panelled walls, polished antler handles and soft lighting.

Our association with Airstream didn’t stop there either. To celebrate our foray into America, we collaborated with Timeless Travel in Denver, Colorado to lovingly restore a classic 1970s Airstream Motorhome for a quintessentially British road trip across the United States. Upholstered in bespoke Huntsman tweeds with a bedroom that transformed into a fully-functional fitting room, the Huntsman Airstream Mobile Tailoring Studio showcased our trademark Savile Row craftsmanship to a brand-new and suitably admiring audience.

The Mille Miglia is a classic car race that winds its way from the Italian city of Brescia to Rome and back again. Dubbed ‘the most beautiful race in the world’, the Mille Miglia is renowned for attracting the most breathtaking classic cars of all time. All of which are required to be built before 1957.

When industrial designer Marc Newson and his fashion stylist wife, Charlotte Stockdale, entered the four-day race in a rare 1955 Ferrari 857 Sport in classic rosso corsa (racing red), they commissioned Huntsman to design their racing outfits. Huntsman’s creative director and co-head cutter, Campbell Carey, was tasked with designing matching racing suits befitting of the style and grandeur for which this historic race is famed.

Informed by Huntsman’s vintage shooting waistcoats, Carey’s designs combined heritage styling with twenty-first century detailing – including deep pockets for iPhones and obligatory sunglasses. The result was a pair of exquisite suits assembled from a tightly-woven cotton called Ventile. This all-weather material is famed for both its lightweight and durable qualities; perfect for long days at the wheel.

With Newson’s suit finished in a cream hue and Stockdale’s in rich scarlet, the power couple of the design world cut a dash with monogrammed collars and matching removable gilets.

Following the success of the Airstreams, Pierre set his sights on revamping another design masterpiece: his limited edition Aston Martin DB5 Shooting Brake. A vintage beauty like this deserved a vintage makeover.

Only 12 of these cars were ever made by coachbuilders Radford Shooting Brakes on behalf of Aston Martin. While most of the other remaining examples gather dust in museums, Pierre’s is used frequently. Fulfilling its original intended purpose as a car built for shooting trips.

The DB5 Shooting Brake’s hatchback was designed for carrying guns and dogs. In fact, it was Aston Martin’s former owner David Brown (immortalised by the famous DB marque) who commissioned Radford to build the first estate version of the DB5 to make room for his leather-seat-chewing gun dog. What better way to protect this close cousin of James Bond’s ride of choice in 1964’s Goldfinger than with a bespoke Huntsman tweed? Pierre opted for a masculine stony grey check to match the silver birch exterior.

This hard-wearing but handsome tweed was the perfect material for the car’s seat covers and as a quilted blanket for the dogs. So beautifully crafted was the Huntsman interior that the car would later be crowned a Concours of Elegance winner and go on to feature in Vanity Fair en Route.

Fans of tweed will know that this superlative cloth fears neither mud nor water. A fact not lost on the most famous field sports enthusiast of them all, none other than Her Majesty The Queen herself, who is rumoured to favour cloth-covered seats in many of her Royal vehicles.

For more information about Huntsman, chat to us using Huntsman Live, or please contact us on +44 20 7734 7441 or shop@huntsmansavilerow.com. For further details about how we’re tailoring our products and services to the Huntsman at Home