We invited Fashion Archivist Cyana Madsen to explain why great style has no gender boundaries.

At Huntsman, we like to think that women really do wear the trousers. From riding breeches for Coco Chanel to shocking yellow nylon pantaloons for Elizabeth Taylor, or the iconic waisted pants of Katharine Hepburn! From redefining tuxedos and rule-breaking morning suits. A well-cut suit, trousers, and a crisp tailored shirt defy gender, but it’s not just the allure of masculine power dressing that has had women striding through the doors of Huntsman for three centuries.

Famously, Katharine Hepburn got to know Huntsman after being fitted for her film wardrobe for The Iron Petticoat in 1956, which featured handsome white silk blouses and perfectly cut khaki trousers, and the skill of our military tailoring made her a lifelong Huntsman devotee when it came to her signature slacks.

Although Hepburn is an icon of the fitted waist and wide leg, the influence of military design on womenswear has been around even longer. From scarlet wool tunics adopted by British society women in the 18th century to 19th-century women’s pelisse jackets with frogging modeled on Hussar soldier uniforms, to the perennial appeal of a trench coat: the military effect isn’t only about camouflage, it is about precise and functional garments with an air of ceremony.

When the ceremony is more “black tie” than “trooping the colour”, nothing is more iconic than the tuxedo. Huntsman client Marlene Dietrich shocked the world when she swaggered onto the screen in Morocco, wearing a top hat and tails. Refusing to be bound by what women should do, she did, and wore, whatever she wanted. 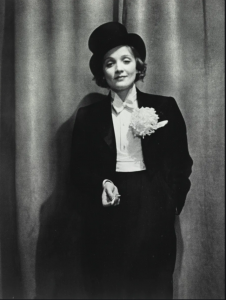 Dietrich had her clothing tailored to compliment what she described as wide shoulders and narrow hips, and the result? The critic Kenneth Tynan put it best when he wrote that Dietrich’s “…masculinity appeals to women and her sexuality to men.” The power of men’s evening wear has lasted from Dietrich’s explosive moment in the 1930s, through the louche smoking tuxedo of the 1960s, all the way to the glamour of the Met Gala, when Charlotte Stockdale appeared in an impeccable Huntsman tux, or Daisy Knatchbull as the first woman to wear traditional morningwear in the Royal Enclosure at Ascot. 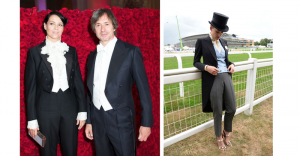 For day-to-day, it could be argued that no menswear has been better worn by a woman than on Diane Keaton in Annie Hall. In chinos and wool sweater vests, Keaton’s instantly classic look was relaxed and chic. Incorporating cashmere scarves and caps with a well-cinched leather belt, she created a silhouette that was informal yet well-composed. By taking blazers and silk ties synonymous with bookish boys, she made the seamless transition into easy elegance that feels as fresh today as it did in the 1970s.

Huntsman has redefined menswear for the modern woman’s wardrobe. Forget borrowing from the boys, with bespoke ladies’ garments that are refined, luxurious, and timeless. It’s with this ethos of individual style at the forefront of our design that we craft the finest handmade clothes for our female clients. Now we invite you to join the club of our esteemed patrons and discover more about Huntsman’s bespoke ladieswear.