Huntsman once again provided the inspiration for the latest movie installment of Kingsman, The King’s Man, due to be released in August 2021. Centered around the year 1919, the movie prequel is an action-packed epic, which narrates the origins of the secret society of Kingsmen. The year 1919 is also poignant for Huntsman, as it is the year that we first established at 11 Savile Row, having moved from our original home on Bond Street.

Since then, our fitting rooms have been graced by numerous personalities of the British espionage world, dressing the likes of Ian and Peter Fleming, Peter Ustinov, Desmond Llewellyn, Fitzroy Mclean, Patrick Leigh Fermor, and without forgetting Kingsman alumni Mark Strong in Body of Lies and Tinker, Tailor, Soldier, Spy with Colin Firth.

Inspired by the courageous and often outrageous exploits of the characters in The King’s Man and our other espionage associates, we invited Fashion Curator and Garment Archivist Cyana Madsen to visit our archive and find out more about our own heroic Huntsman in the year 1919. Unearthing remarkable stories from our ledgers, Cyana discovered Huntsman customers whose stories are could inspire action movies of their own!

Make sure to discover the Huntsman 1919 Collection, created to celebrate our arrival at 11 Savile Row in 1919 and inspired by our secret service heritage we have designed an exclusive selection of luxury accessories and gifts inspired by Huntsman in 1919.

In 1919, after establishing on New Bond Street, Royal Warrant Breeches makers H. Huntsman & Son moved to their new location at 11 Savile Row. Savile Row had been a tailoring destination since the early 19th century, and so it was a perfect fit for Huntsman to take a rightful place among the bespoke titans on the Row.

After supplying military uniforms to servicemen during WWI, the house had become a favorite among the returning veterans, who were looking to rejoin civilian life in suits that reflected the new, post-war world. The year 1919 was not only one of the significant changes for Huntsman but for a nation adapting to peacetime, in a brave new world. 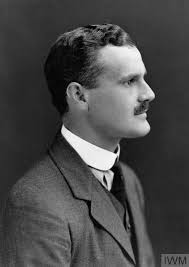 For those men returning from the war, tailoring and the strictures around menswear had relaxed. The formal long coat of the years before the war became relegated to evening wear; suit jackets became shorter, and trousers slimmer. What we recognize as a classic 3pc. suit today was adopted for daywear as the “Lounge Suit”.

The Lounge Suit became a frequent order in Huntsman ledgers, as these new styles were adopted and embraced. Major General R V Pollok was an example of a serviceman who returned home to adopt this fashion. In the Huntsman archive, we have an example of his grey wool coat, from a lounge suit typical of the time.

Although the war was over, it certainly was not gone from the minds of those who had fought. In addition to ordering the fashionable menswear of the age, with lounge suits for the day, and black dress coats with pristine white waistcoats for the evening, veterans were still ordering military dress jackets and breeches. Having the awards, medals, and insignia they earned during the war attached.

Service was a point of pride, and a source of identity- for veterans of “The War to End All Wars”, having one’s photograph taken in uniform was vitally important. 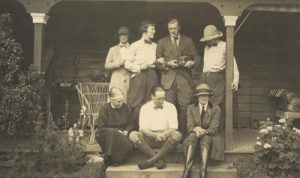 Ladies too enjoyed a return to normality, albeit with many women now having the right to vote. This hard-won independence extended to leisure pursuits and sport, with riding breeches for ladies riding astride becoming a standard order.

Nowhere is this more prominent than with Miss Aileen Bell. The Bells were a society family from Queensland, Australia, with strong ties to the UK. In fact, Aileen served as a nurse in Europe during WWI, and in 1919 returned to Australia, where her family played host to Edward VIII, pictured here riding with Miss Bell on horseback,  and later, the Queen Mother. 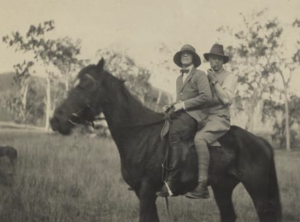 The entire family were clients of Huntsman, and Miss Bell has a page of orders dedicated just to her riding breeches. Aileen was a personal friend of Agatha Christie, who provides the most vivid depiction of the Bell women in a letter from the time; “The girls….were fair, tall, with rather long faces; all graceful in motion, all wonderful riders, and all looking like energetic young fillies.”

Aileen never married and spent the remainder of her life running the family estate with her sisters and traveling the world. She portrays perfectly the kind of pioneering, avant-garde woman with which Huntsman has been so often associated. 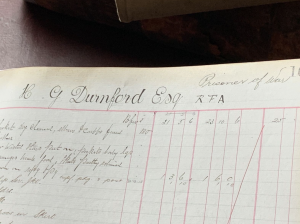 Of course, not all of Huntsman’s clients would return home after the war. For those not lost in battle, others had been interned in Prisoner of War Camps. This is the story with Captain H.G. Durnford, of the Royal Field Artillery. Entries from the Huntsman ledgers show orders placed in 1917 for Durnford during his internment at the Holzminden POW camp in Germany.

This may seem surprising, but Prisoner of War camps in the First World War were vastly different from what one might expect. Illustrations and accounts from the time outline that though it was certainly a prison, the officers strove to maintain the recreational activities and standards of gentlemanly life as they best could. Even whilst incarcerated at the hands of the enemy, a gentleman was expected to remain a gentleman and dress as such. 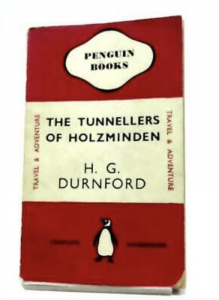 Astonishingly, Captain Durnford aided in the escape of 29 men from Holzminden through a secret tunnel, dug by the prisoners and later published a book about it. He later escaped himself from a POW camp in Stralsund on a forged Danish passport – and one has to wonder whether he was wearing Huntsman at the time of his escape. 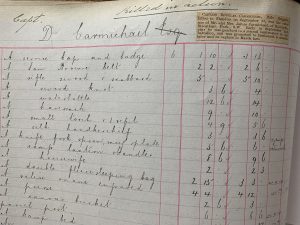 Not all Huntsman accounts were revisited after the Great War. For those lost in combat, a newspaper obituary soberly clipped and pasted in the ledger signified that there would be no further orders to be had.

One particular order belonging to Captain Douglas Carmichael stands out as unique due to the nature of the goods. Carmichael had ordered not only his uniform garments but indeed his entire kit, from his camp bed to his cutlery from H. Huntsman and Sons, Captain Carmichael, who was at the time frequently commended for his bravery, unfortunately now rests as one of the newspaper obituaries, clipped in place.

Do you have stories of your own noteworthy Huntsman ancestors? We’d love to hear them! Chat to us with HUNTSMAN LIVE and discover more about the Huntsman 1919 Collection.