London-born, Savile Row trained Ralph Fitzgerald brings the Huntsman bespoke experience to clients in New York City and across the United States from our Pied-á-Terre on W57th Street.

London-born, Savile Row trained Ralph Fitzgerald is the U.S. Cutter at our New York Pied-à-Terre, from which he serves our American clientele, both from the Cutting Theatre of our bespoke salon and on regular trunk shows across the United States. 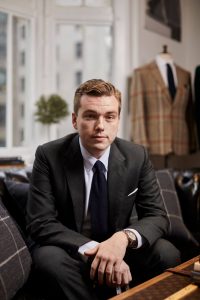 Ralph’s passion for cloth, cut and design stems from when he was a young child. From the time he’d spend roaming the clothing markets of London with his mother, his interest was ignited. It was his mother who recognized and encouraged this interest in tailoring.

At only 16 years old Ralph got his first experience in the world of bespoke tailoring, not on Savile Row, but on Mount Street, an equally reputable destination in the heart of Mayfair, and a name synonymous with luxury. His first position was at Douglas Hayward, a Tailor with a clientele the likes of which included Steve McQueen, Michael Caine and Roger Moore. For Ralph, these names epitomised elegant and understated sophistication, which very much influenced his personal style. It was also here that Ralph first met Huntsman Head Cutter and Creative Director Campbell Carey, who was to become his mentor and tutor.

From here Ralph joined Huntsman, beginning his training in the enviable position as Assistant Cutter to Campbell. With Campbell’s guidance and expertise Ralph’s natural talents as a Cutter were honed and refined. Every tailoring house has a signature silhouette on which their reputation is built, with the two men working closely together, Ralph became well versed in executing the iconic Huntsman house cut.

This is why when Huntsman became the first Savile Row tailor to open a permanent atelier in New York, Ralph was a natural fit to lead the Cutting Theatre as U.S. Cutter.

Today Huntsman clients in the United States who would previously need to travel to London can enjoy the Huntsman bespoke experience with the assurances that they are getting the full Savile Row bespoke service, in the convenience of New York City.

It is his unfaltering dedication and passion for the art of bespoke that has made Ralph so popular across the pond building a reputable clientele base, including Marc Jacobs, who personally requested Ralph to cut his wedding suit, Met Gala suit and the suit worn when he received the first-ever Fashion Trailblazer Award at the MTV VMAs.

His professional relationship with Marc epitomises how Ralph approaches every client. Recognising the tastes and desires of the individual in both conception and execution. As all good tailors will tell you, the relationship between Cutter and Client is unique and will often last a lifetime. Consider it a collaboration, not unlike commissioning a portrait of yourself. It is a conversation in the art of design, an innate knowledge of cloth and a bond built on trust. 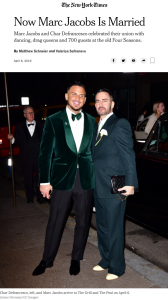 Ralph’s real passion lies in the most technical aspect of Cutting: the drafting and cutting the pattern, for which Ralph exhibits a natural ‘rock of eye’, a tailoring phenomenon in which the Cutter abandons the numbers on a paper pattern and lets their natural instinct shape the cut. When he’s not at his cutting board, he will undoubtedly be on the road with our U.S. Director Ed Turco, spreading their shared expertise and enthusiasm for bespoke tailoring at one of our Trunk Show locations.

Having spent five years at W57th Street, Ralph now calls New York home, where he happily resides with his fianceè. A fan of jazz, it was no surprise that Ralph felt so comfortable in the Huntsman pied-à-terre upon discovering it was previously the home to Tony Bennett!


Book an appointment to meet Ralph and the team at W57th either in New York, on our regular Trunk Show visits.