From the Huntsman archive, we have an early example of what we now recognise as the modern lounge suit, made for Huntsman client  Major General R. V. Pollok in 1923. 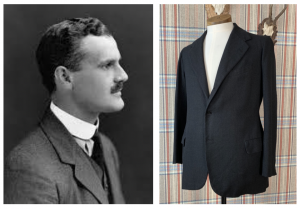 For men returning from the war, tailoring and the strictures around menswear had relaxed. The formal long coat of the years before the war became relegated to eveningwear; suit jackets became shorter, and trousers slimmer. What we now know as a classic three-piece suit today was adopted for daywear as the “Lounge Suit”. 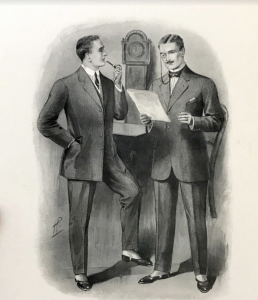 Above: An illustration of men sporting the new post-war Lounge Suit

The Lounge Suit became a frequent order in Huntsman ledgers, as these new styles were adopted and embraced. Major General Pollok was an example of a serviceman who returned home to adopt this fashion, the grey wool coat from his lounge suit remains in almost pristine condition and could be mistaken for a modern coat!