This May, Sotheby’s will partner with esteemed Savile Row tailor Huntsman & Sons to stage its first online-only luxury lifestyle sale. Featuring an array of bespoke pieces including this iconic timepiece 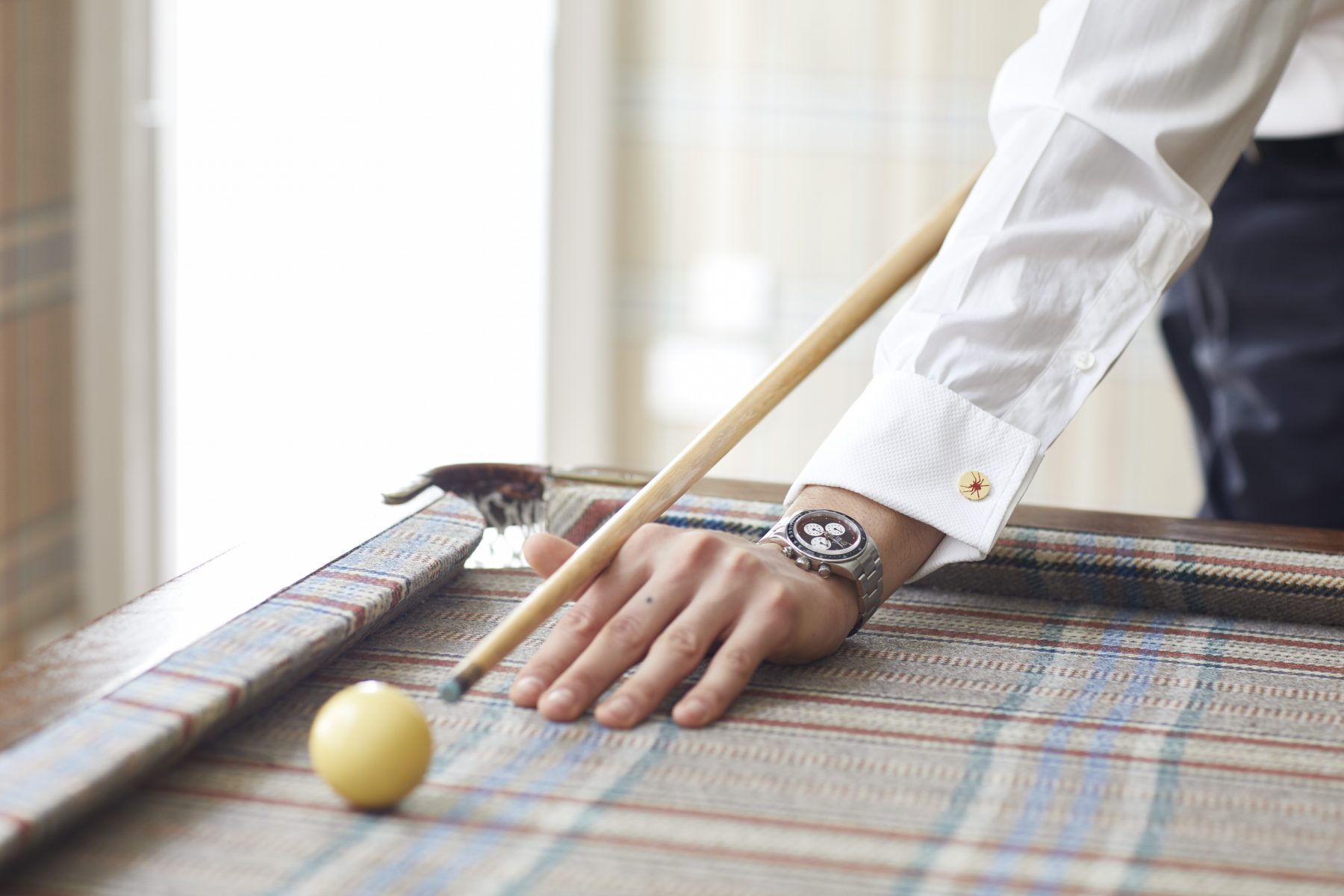 A watch is about so much more than timekeeping. It’s an expression of taste, lifestyle, history even and three striking examples feature in the HUNTSMAN: Curated by Pierre Lagrange online sale, which opens on 22 May and closes on 1 June.

The more iconic the make and model, the more likely it is to become inextricably linked with renowned individuals. Take the Rolex Cosmograph Daytona. First designed for racing drivers in 1963, its combination of chronograph and tachymeter mean you can measure average speeds up to 400 miles/km per hour. You can also keep track of ticking seconds, as well as lapsed hours and minutes on the counters in the centre. It was for these reasons that Joanne Woodward gave her husband Paul Newman a rare version of the watch in 1972, the year the actor first took part in a professional event as a racer.

The Huntsman Rolex, with the tailor’s distinctive claret branding

Newman continued to compete into his eighties, mainly driving Datsuns in the road racing TransAm series in the US. He also, apparently, was never seen without his Rolex Daytona. As his ownership of the watch became more widely known, the details of his specific model became more popular. These were most notably its distinctive counters, with their bold numbers and block markers. Over the years, the Rolex Daytona ‘Paul Newman’ has become one of the most sought-after watches in the world.

The rarity and cache of this classic model has in turn inspired another development in the Daytona’s history. When George Bamford realised that the model he’d longed for (vintage, steel black dial, Rolex Daytona Zenith movement, with inverted 6 9 sub dial) was being worn by many of his acquaintances he started to think how he could make it special again. Working with a materials engineer at the family’s business, JCB, he discovered how to apply coatings to existing Rolexes using a process from the mining industry. This opened up a whole new world of customisation: of colours, finishes and other features.

Such was the demand for these personalised pieces, Bamford turned his idea into a business. One of Bamford Watch Department’s earliest customers was financier, Pierre Lagrange. “I bought one of the first black Rolexes George Bamford ever made, maybe 13 years ago. It’s part of the gentleman’s lifestyle, to have a precious watch. And for that piece to be so unique makes it even more special.”

Fast forward ten years. Lagrange becomes the chairman of the bespoke tailors, Huntsman, and discovers that Paul Newman had long been a customer. The connection was too significant to go unmarked. He decided to pay homage to the legendary actor with a new version of the Daytona.

Working together with Bamford and later ProHunter, he wanted to create something very simple and discreet: “A little like a Huntsman coat, beautiful and balanced.” The end result brings Huntsman red claret into the traditional Daytona dial, and the tailor’s logo is there too – unassuming yet present. “I want people to recognise it as a ‘Paul Newman’ but then see that it’s subtly different.”

For the bespoke treatment of the Milgauss, Huntsman focussed on the dial, impressing one of their clients’ favourite herringbone patterns into the metal, with a touch of Huntsman claret on the crown and second hand while the Subdate Military was commissioned to create a watch for the modern Huntsman.

For Lagrange, the exercise has been one more for pleasure than anything else. Nowhere is that more obvious than in the number of Huntsman Rolexes that will be available on a bespoke basis: “Eleven, for 11 Savile Row.”

Watch Treasures from Chatsworth, Presented by Huntsman at www.sothebys.com/Chatsworth