Treasures from Chatsworth
EPISODE 5 – THE NEEDLEWORK OF ELIZABETHAN CHATSWORTH

The partnership between Huntsman and the Sotheby’s series, strikes a chord with the heritage that Huntsman represents . The way in which contemporary designs are influenced by those of previous generations of craftsmen resonates with the stories that Sotheby’s has woven through this series of films.

Watch Episode 5 of Treasures from Chatsworth, Presented by Huntsman and Produced by Sotheby’s

EMBROIDERING THE THREADS OF HISTORY

When David Oyelowo was nominated for Best Actor at the Critic’s Choice Awards in 2015, he found he had another reason to celebrate. The ceremony was to be held on 15 January: the birthday of Martin Luther King Jr, the man he’d played in Selma to such great acclaim.

King’s message of compassion, equality and justice remains as relevant today as it was in the south of the fifties and sixties. And Oyelowo was keen to make the most of the coincidence. With Huntsman he came up with the idea of using his clothes as a talking point.

From the outside, Oyelowo’s suit for the ceremony is sombre and elegant. Inside, it is exquisite. Cream silk stitches curl through the black silk lining, as though the needle has been dipped in ink.

Read them, and you’ll discover the words of Martin Luther King’s favourite song Take My Hand, Precious Lord. Inspired by Psalm 139, the gospel classic was written by the Reverend Thomas A Dorsey in 1932 and has long been dear to congregations throughout the United States. As the civil rights movement gained strength, Martin Luther King asked that it be sung at gatherings, understanding that its words offered hope and encouragement in the face of violence and discrimination.

When the darkness appears and the night draws near And the day is past and gone, At the river I stand, Guide my feet, hold my hand

The hymn was most notably interpreted by the Queen of Gospel, Mahalia Jackson. And it fell to her to sing it once again at King’s funeral, on 9 April 1968. Selma pays tribute to that friendship and the significance of the song in one of its many powerful scenes. 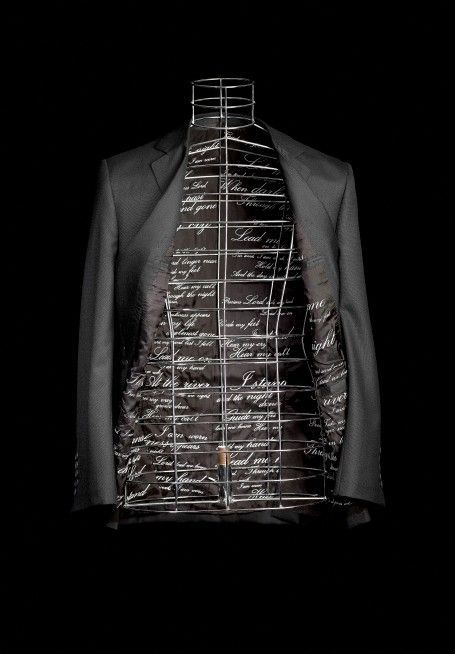 Getting the jacket ready in time meant working quickly. Tied to a busy schedule, Oyelowo could only commit to one fitting, leaving just over a month for the suit to be made. “That was a feat in itself,” says Carol Pierce, Huntsman general manager. “We looked at the words of the song and worked out how they could be positioned in the jacket. We wanted to vary the letter size so it looked like a real piece of craft, then we had to get the scale right, so that the seams would allow the embroidery to flow.”

On top of the 80 hours that went into making the suit, Huntsman’s embroiderer added another 20, painstakingly forming each letter from hundreds of tiny stitches. “It just shows what you can do,” says Carol, “but I wouldn’t want to have that every week!”

It was worth it. When David Oyelowo opened his jacket on the red carpet, photographs were seen around the world. He may not have walked away with the Best Actor award, but he took something else with him instead: the knowledge that he’d reminded a far wider audience of what the movie Selma was all about.