To Survive A Pandemic, Savile Row Cuts a Bespoke Strategy 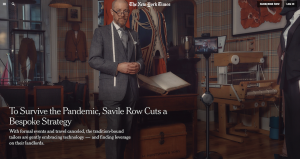 LONDON — One morning in early November, a tailor on Savile Row took the measurements of a client 5,500 miles away with the help of a robot. The tailor, Dario Carnera, sat on the second floor of Huntsman, one of the street’s most venerable houses, and used the trackpad on his laptop to guide the robot around a client who stood before mirrors in a clothing store in Seoul. Mr. Carnera was visible and audible to the client through an iPad-like panel that doubled as the robot’s face.

He was collecting the roughly 20 measurements that are standard in a first Savile Row fitting, the initial step in the fabrication of a made-from-scratch suit that starts at about $8,000 and can reach as high as $40,000 for the priciest material.

“Twenty-seven and a quarter,” said an assistant in Seoul, through a translator, holding a measuring tape.

This system, up and running since September, wouldn’t work without a pair of living, trained hands on the client. As robots go, Huntsman’s is primitive — essentially a camera and intercom on wheels. It doesn’t have arms, let alone the fingertips to find an inseam. The point of the gizmo isn’t to eliminate the need for the human touch. It’s to eliminate the need for Mr. Carnera to travel, which, because of the pandemic, he can’t.

This grounding is a fiasco for Savile Row tailors. They typically spend nearly as much time flying around the world, fitting clients, as they do cutting and sewing. For many houses, 70 percent of revenue comes from these overseas trunk shows. With tailors stuck in their shops, and London tourism in free-fall, the most famous men’s clothing street in the world is gasping for life.

“Our company lived through the Boer War, World War I, the Depression, World War II, recessions,” said Simon Cundey, the managing director of Henry Poole & Co., which traces its roots to 1819. “But through all of these crises, we could visit our customers and they could visit us. This is a tragedy on a different scale.”

The struggles started before the pandemic. The decades-long drift from formal wear has wounded a retail strip known for elegant, hand-sewn garments that take up to 90 hours to produce. Plus, the cultural cachet of the suit has waned. All Savile Row shops are associated with a Hollywood star who was a regular: Fred Astaire at Anderson & Sheppard, Charlie Chaplin at Gieves & Hawkes. Most died decades ago.

Covid has turned the Row’s challenges into a brush with the abyss. Even dandies are now trundling around their homes in Lululemon. The four months of business between the first and second lockdowns helped, but not a lot. Profit-sapping quarantines meant that tailors still could not fly to other European countries, Asia and the United States, as they typically do three or four times a year.

American Anglophiles are the street’s not-so-secret sugar daddies. New York, Los Angeles, and a few other U.S. cities account for roughly one third of all revenue on the Row, managing directors here say.

Fortunately, the biggest landlord on the street has pockets deep enough to afford some rent forbearance. Most of the Row is owned by one of the richest entities on earth: Norway’s $1.1 trillion sovereign wealth fund. It owns a majority of the Pollen Estate, a holder of prime acres of central London real estate for nearly 400 years.

The overseers of the fund know that if the celebrated houses of Savile Row close or scatter for cheaper premises, the street’s cachet will disappear, along with much of its value. This gives tailors here a rare kind of leverage. Which may be one reason there’s a lot of we’re-in-this-together talk from Julian Stocks, a Pollen Estate property director.

“The fund family are actually very long-term thinkers,” he said. “It’s not about that slightly American approach of ‘make a quick buck and move on.’ It’s all about sustainable growth and value over the long term.”

How long this generosity will last is a major preoccupation for owners and employees here. So is the broader question of whether the street can shake off its image as a fusty redoubt of old-school haberdashery. Many of the nearly 30 shops are attempting an update. Some are opening or expanding online shops that offer ready-to-wear lines. Others are selling bespoke doctor’s scrubs and pandemic masks. A few are experimenting with Zoom. So far, only Huntsman has built a robot.

“I was skeptical when I first heard the idea,” Mr. Carnera said. “I’m very traditional. I work with a pair of shears that are about a hundred years old. But the bottom line is that we had to do something.”

The birthplace of the tuxedo

The “golden mile of men’s tailoring” is actually just over 150 yards long. Starting in the early 19th century, it was the unofficial couturier of the British Empire, the place where England’s military leaders, equestrians, barristers and aristocrats bought ceremonial finery for parades, hunts, dinners and coronations. Both the tuxedo and the bowler hat were invented here, and when the suit emerged as the uniform of capitalism, the street set the gold standard for craft and durability. Its history and reputation are stellar enough that the name has found its way into at least one language. The Japanese word for “business suit” is sebiro. (Say it out loud.)

Suits made here don’t simply fit in ways that feel uncanny. They are intended to perform the sartorial version of plastic surgery, fixing imperfections like pigeon chests, splayed feet, uneven arms, humpbacks and more. It’s a goal that can’t be achieved through math alone. A fitting on Savile Row is a handsy tango that lasts anywhere from 20 minutes to an hour, and there are three fittings in all. As tailors measure, they take notes, mental or otherwise, on physical quirks that no tape could capture.

The ability to meld numbers and observations is what is known in the trade as “Rock of Eye.” For years, Rock of Eye was assumed to be possible only when tailor and client were in the same room. Now, in the age of the coronavirus, Mr. Carnera thinks otherwise.

“He’s got a dropped left shoulder and a slight bow to his legs — quite erect posture,” he said of the customer in Seoul when the fitting ended. “I can see all I need to see.”

Three out of four Beatles

Set in the upscale Mayfair neighborhood in Central London, Savile Row is a three-minute walk from Regent Street, one of the busiest shopping boulevards in Europe. Somehow it still feels separate and secluded, like a private club you might miss unless someone pointed out the entrance. It’s a by-appointment destination that doesn’t get a lot of foot traffic. Customers range from royals to mobsters, plus plenty of financiers.

“I had this one customer, young guy, whose father brought him in,” Mr. Carnera said. “He insisted I make an inside pocket for his joints.”

Raised in southeast London, Mr. Carnera skipped college to start an apprenticeship at Anderson & Sheppard that lasted for three and a half years. During that time, he worked solely on jackets, though his duties also included sweeping the floor, making tea and enduring practical jokes, like being sent on errands to buy button holes.

He later learned the art of cutting patterns, which are made from pieces of brown paper that provide the blueprint of every garment. Unlike made-to-measure clothing, which starts with a jacket that a customer tries on and is then tweaked, bespoke begins with the customer’s own contours. Every house on Savile Row keeps its paper patterns, thousands of them, usually strung on a line. At a glance they look like animal pelts.

“This one is Gregory Peck’s,” said Mr. Carnera, after rummaging through a closet at the rear of Huntsman where patterns are kept in chronological order.

Savile Row is known for producing one-button jackets with roped shoulders that give men a slightly squared off look, a vestige of the street’s military roots. Every house, though, has its own aesthetic. Dege & Skinner cuts its trouser narrowly and makes wider-than-usual lapels. Owners of a suit made by Huntsman — jacket cut long and close to the chest, an equestrian silhouette — are said to nod in recognition when they encounter each other. 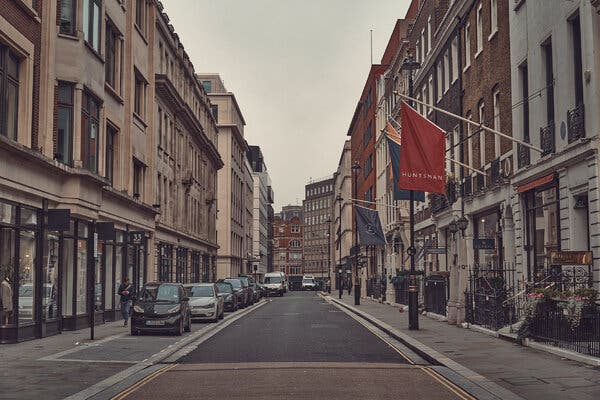 Huntsman seems an improbable site for high-tech innovation. The second floor has a bar, a dart board and huge ancient ledgers with handwritten notes in elegant script. They look like props for a film adaptation of a Dickens novel. Actually, they are the in-house accounting books. There are entries for dukes, earls and many pages devoted to Queen Victoria, whose purchases included “2 Striped waistcoats with sleeves” and “5 pairs Western Angolan trousers.”

The robot idea sprang from the ever-churning mind of Pierre Lagrange, a long-haired 58-year-old Belgian hedge fund manager who acquired the company in 2013. Part nerd, part swashbuckling capitalist, Mr. Lagrange rides a Harley and exults during an interview about the pink, wide-wale corduroy jacket he owns. (“Everybody says it’s amazing.”) He’s been pushing Huntsman to expand its audience and offerings, bolstering its website and opening a Huntsman satellite in a Manhattan apartment that once belonged to Tony Bennett.

When Covid shut down retail in March, he brainstormed with a manager and started thinking about physicians who perform remote-controlled surgery. If a robot can work on a kidney, he figured, why not a suit? 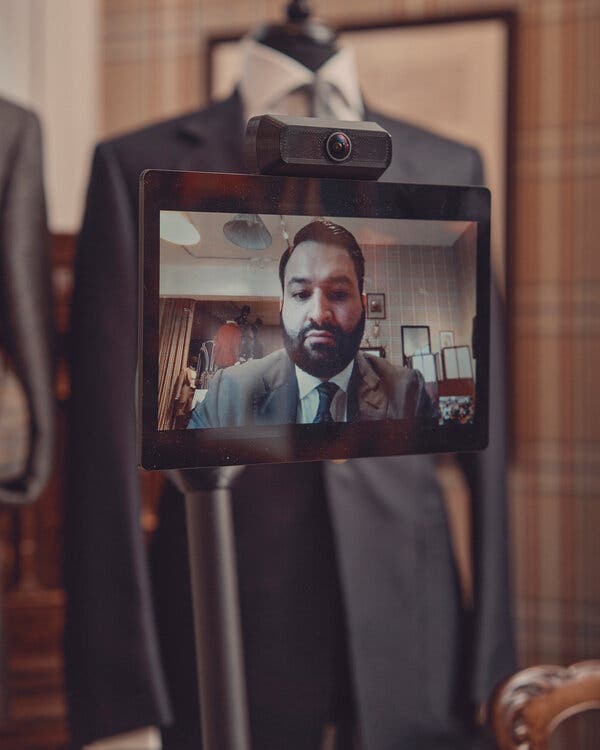 Taj Phull, Huntsman’s head of retail, appears on the screen that functions as Mr. Hammick’s “face.” The robot is named after Colin Hammick, the house’s much-revered and now-deceased head tailor.

“I’ve always been a proponent of using tech in ways that let people focus on what they’re really good at,” he said, “whether that’s a hedge fund or in tailoring.”

The company had six robots built and christened all of them “Mr. Hammick,” a tribute to Colin Hammick, Huntsman’s much-revered and now-deceased head tailor. Five Mr. Hammicks are now in the United States and Asia. They are assembled in places convenient to customers, like their homes, by employees who live in the same country.

To date, the Hammick brigade has yet to produce a finished suit. But even before that proof-of-concept moment arrives, Mr. Lagrange is optimistic. Suits made on the Row for overseas customers take about a year from start to finish, largely because all three fittings require a visit, and those are spaced a few months apart. By relying on Mr. Hammick instead of planes, the whole process will take five months.

“I don’t know how fast we would have gotten here without Covid,” said Mr. Lagrange, of the machines. “Sometimes you need a crisis.”

David Segal is a Business section reporter based in London. @DSegalNYTimes