In 2020, as brick and mortar Meccas were transformed into ghost towns, Huntsman, a Savile Row institution that opened in 1849 and still keeps accounts in ancient ledgers and has a dartboard and bar on the second floor, turned to tech to deliver its bespoke tailoring to clients who no longer had the privilege of the PJ and a private appointment at number 11. Inspired by physicians who perform remote-controlled surgery, the brand built six robots that can be assembled in a client’s home, wherever they are. The ‘telepresence’ robot (they’re all called “Mr. Hammick,” a tribute to Colin Hammick, Huntsman’s now-deceased head tailor) is then controlled using a trackpad by a tailor in London, who is visible and audible to the suit’s recipient thanks to a screen that also serves as the robot’s face. 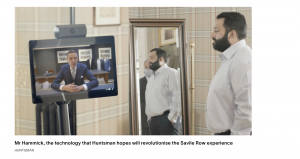 So far the robots are mostly used to collect the 20-odd measurements that are needed to initially fit a suit, but it has already streamlined the process. A suit that would take a year for a customer abroad can be shortened down to five months thanks to Mr Hammick’s deft(ish) robot fingers. Speaking to the New York Times in November, Pierre Lagrange, the Belgian hedge fund manager who bought Huntsman in 2013, said, “I’ve always been a proponent of using tech in ways that let people focus on what they’re really good at,” he said, “whether that’s a hedge fund or in tailoring.”

“I don’t know how fast we would have gotten here without Covid,” he added. “Sometimes you need a crisis.”